NFL rarity: Watt brothers will be second trio since 1927 to appear in the same game

Sunday's matchup between the Texans and Steelers will mark the second time since 1927 three brothers will play in the same NFL game. 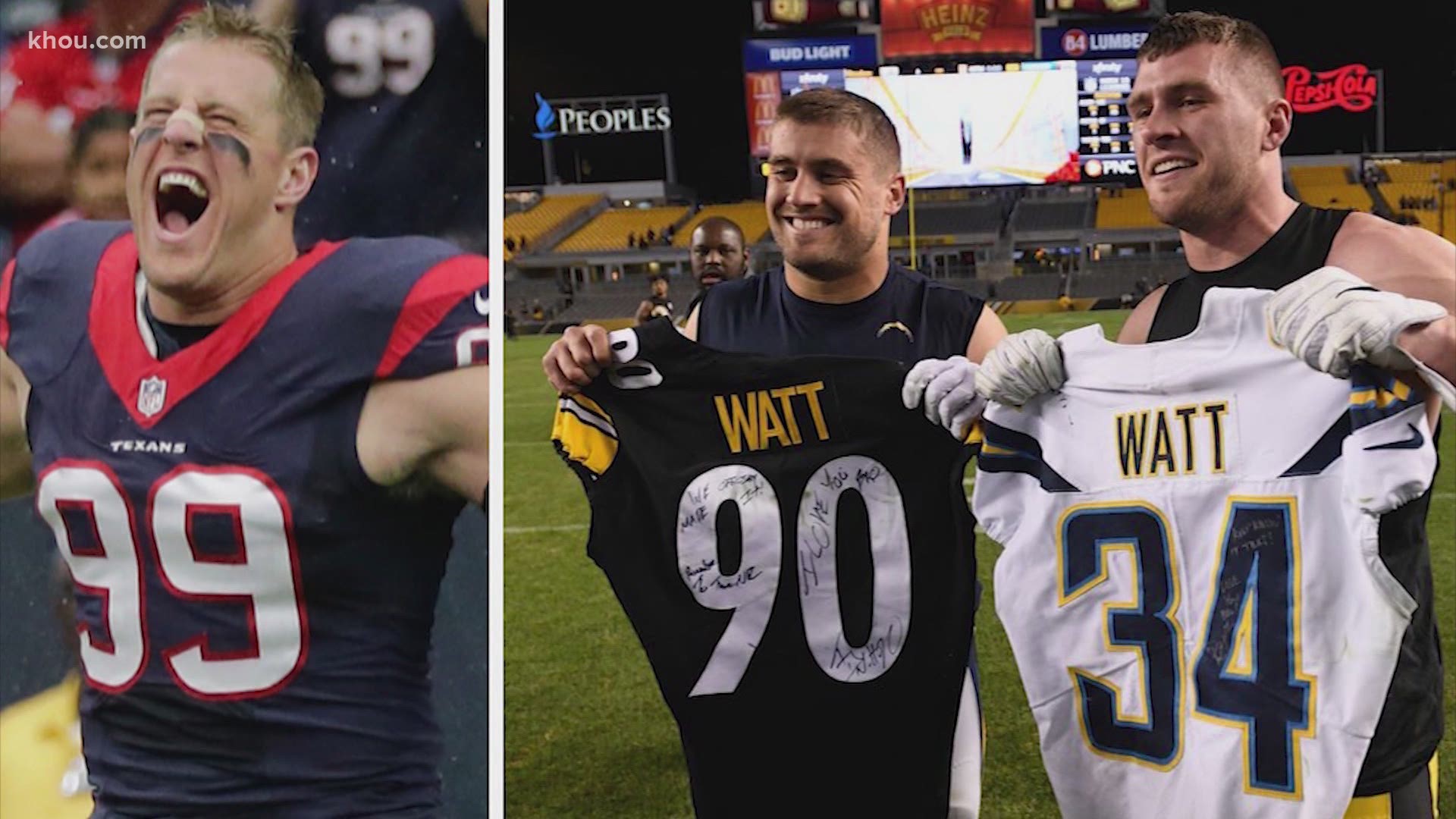 HOUSTON — When Houston Texans defensive end J.J. Watt takes the field against the Pittsburgh Steelers on Sunday, it will mean more than just a Week 3 matchup. He will be on the same field as his two brothers, linebacker T.J. Watt and fullback Derek Watt, who both play for the Steelers.

Sunday will mark the second time since 1927 three brothers will play in an NFL game. Last year, Tremaine, Terrell and Trey Edmunds took the field for the Buffalo Bills-Steelers game. Joe, Cobb and Bill Rooney all played for the Duluth Eskimos in 1927.

It’s also the first time all three Watt brothers, who played at Wisconsin, will play in a game together at any level of their careers.

It's a Watt family gathering in Pittsburgh on Sunday. pic.twitter.com/JQd9AhHxj2

J.J. Watt faced Derek Watt, who played for the Los Angeles Chargers, last season in the Texans’ 27-20 win over the Chargers. J.J. Watt had been injured during previous matchups with the Chargers and Steelers.

Derek Watt signed with the Steelers earlier this year, joining T.J. Watt. The two faced off during Steelers-Chargers matchups in both 2018 and 2019.

As exciting as it is for the brothers to play in the same game, protocols with COVID-19 are preventing their parents, John and Connie Watt, from attending the game at Heinz Field.

“I would love them to be there,” J.J. Watt said. “I know they’re proud and they’ll be watching, and it’ll be a special day.”

"We wanted it more than anything," John Watt told Steelers.com. "It might be the only time it's going to happen, who knows. Hopefully, there will be more."

J.J. Watt hopes for another meeting against Pittsburgh if only to defend his title for “Best Uncle” to his nephew, Logan, who was born last year.

“I think that’s probably the biggest thing that I’m sad about this weekend, is with all the protocols and everything I haven’t gotten to see my nephew in a long time since Derek went to Pittsburgh to get settled into his house earlier this offseason,” J.J. Watt said. “Being in the same city, being five minutes away from their house and not being able to see my nephew, that’s going to be tough. He’s wearing Steelers stuff all the time. He lives like four houses away from T.J. The whole thing is just set up for me to fail in terms of being a great uncle. I can send him all the Texans stuff I want but it ends up in the dog’s chew toy bin. I try my hardest, but hopefully, I can see him soon.”

Even without their parents and extended family in the stadium, the Watt brothers recognize their impact on getting to this historic moment.

“It’s a testament to our parents and everything that they did and all the people in our lives – our coaches, our trainers, everybody who helped us get here. It’s going to be very, very cool,” J.J. Watt said.