On Monday afternoon, SFA suspended head football coach Clint Conque, but details about the suspension and what it means for the team are scarce. 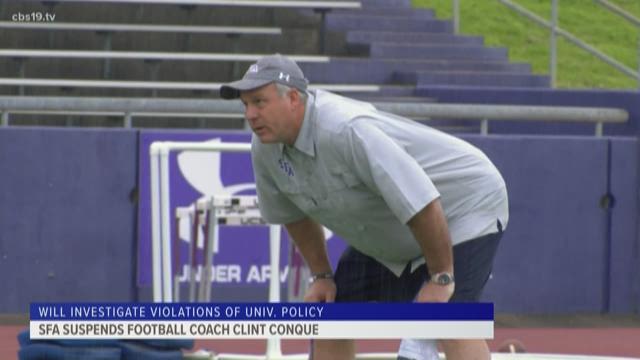 NACOGDOCHES - In a little more than 2 months, the SFA football team will play their first game of the 2018 season.

But the big question now is...who will be coaching the team?

We spoke to multiple members of the SFA communications team tonight, but the school remains very tight-lipped, simply saying that any new information will come via a press release.

CBS19 also spoke with multiple current and former students tonight. The recurring theme that they told us was that a lot of people on campus were completely caught off-guard by this news. We also spoke to someone with direct knowledge who told us that the football team wasn't given any reason for this suspension.

Conque has spent 4 seasons with the Lumberjacks, going 21-25 and leading SFA to the postseason once (in his first season in 2014).

CBS19 will continue to follow this story and we'll have the latest updates online and on-air.