Austin FC supporters kept the TIFO for the home opener a secret until it was revealed at the start of the match. 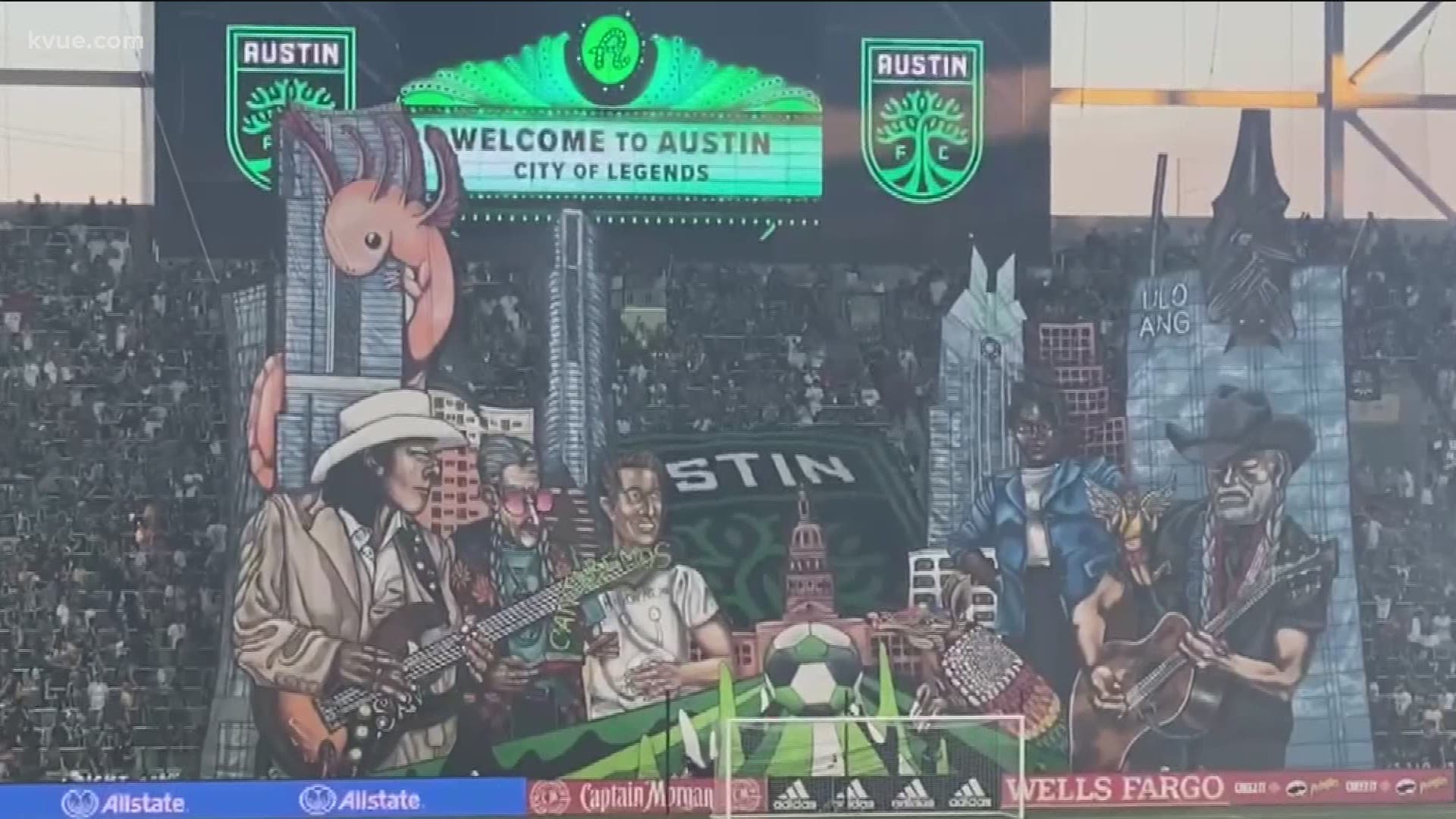 AUSTIN, Texas — Austin FC supporters unveiled an Austin-themed TIFO at the beginning of the home opener versus the San Jose Earthquakes.

Austin FC supporters kept the TIFO for the home opener a secret until it was revealed at the beginning of the match. The finished piece featured Stevie Ray Vaughan, Raul Salinas, Matthew McConaughey in a Daniel Johnston T-shirt, a Barton Springs salamander, a bat, a pride-themed armadillo, Barbara Jordan, Leslie Cochran with angel wings, and Willie Nelson in front of an Austin skyline.

Rising above the Capitol building was the Austin FC logo. The screen above the supporters section read, "Welcome to Austin. City of Legends."

"We have a new legend in the city that's growing right now, and that's Austin FC," said Rigoberto Rodriguez Lira.

Supporters created the TIFO with the help of muralist Luis Angulo, also known as ULOANG.

"This is like the perfect gig for me because my career is, you know, I'm a muralist. It's what I make my living off of, and what I do for fun is soccer. So, yeah, this is like a dream gig for me," said Angulo.

"Just seeing him create out here with us and letting us be a part of his piece and trusting us to complete it, and to display it, like, it's something that's going to make him and so many people proud of creating," said Lira.

Once they knew what the TIFO would look like, volunteers got fabric and sewed it together to create a canvas. After they had that canvas, they would bring it to the warehouse, lay it on the ground and snap lines to make a grid. Angulo would sketch an outline, pick out paints and code each section for volunteers to paint.

"I coded everything kind of like a paint-by-numbers type of deal," said Angulo.

Day after day, supporters would come add paint to the TIFO, then Angulo would return to add final touches. They repeated that process a few times. Because of its size, it was like creating four different TIFOs.

It measured out to be about 100 feet by 60 feet. There were close to 300 volunteers. About 100 people helped rig it up on game day. They used about 70 gallons worth of paint, and it was months of preparation. All for a display that lasted two minutes and eight seconds.

"It's bittersweet because that moment when they unveil it will be amazing, you know, seeing it finally get hoisted up in the stadium. But, yeah, it'll be gone in just a few minutes and that's it," said Angulo.

Mateo Clark from La Murga de Austin added, "Just imagine a big mural on fabric that will last for two minutes and then never be seen again. It's very ephemeral and it's kind of, you know, soccer fans are crazy. And the whole idea is for us to demonstrate how much we're willing to give for how little in return. Even if it's just a minor advantage for the team, or if it just creates a special moment for the community that can be remembered, that's really the goal. And so the fact that it's so temporal or so kind of fleeting, kind of adds to the beauty and romanticism about it."

Minutes after the TIFO was revealed, Austin FC tweeted a photo with the caption, "City of Legends."

As for what happens to the TIFO now, supporters aren't quite sure. They hope a business might want to display it downtown for a while.

Earlier this week, ahead of the USWNT match at Q2 Stadium, KVUE's Brittany Flowers got a sneak peek of the TIFO made in honor of Crystal Dunn. The TIFO featured Dunn kicking a soccer ball with the text "Christened by Queens."

Meet the Austin FC fan who has been to every game