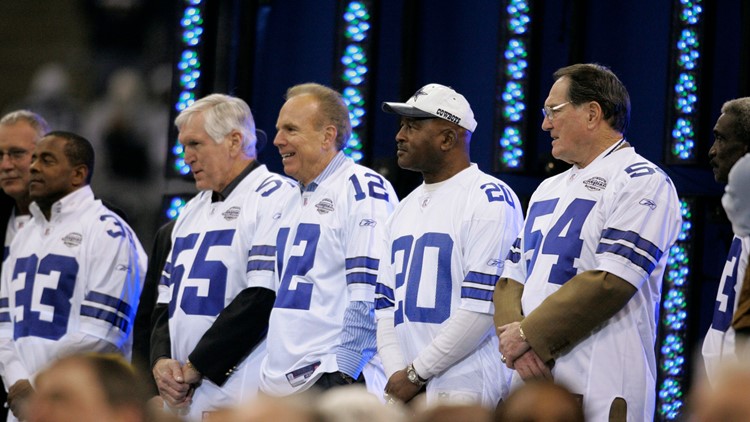 Why don't the Cowboys retire the jersey numbers of their legends?

DALLAS — Dallas Mavericks owner Mark Cuban joined the premiere of the "Ben & Skin Show" on 97.1 The Eagle [KEGL-FM] and announced the team would be retiring Dirk Nowitzki's No. 41.

The NBA champion owner said the distinct honor would occur for Nowitzki sometime early in the 2020-21 season.

With the Mavs set to place Nowitzki's 41 among the four other jerseys retired in club history — Derek Harper (No. 12), Brad Davis (No. 15), Rolando Blackman (No. 22), and Kobe Bryant (No. 24) — it begs the question: why doesn't the Dallas Cowboys retire the jersey numbers of their legendary performers?

Aside from the more obvious answer that there is no one who embodies all of the greatness of the franchise as Nowitzki does, the other reason is it just goes against tradition.

According to Jeff Sullivan of DallasCowboys.com, the Cowboys are one of five teams in the NFL that doesn't retire jerseys.

Does that mean whoever the Cowboys sign as a kicker can wear Troy Aikman's No. 8, a defensive back wear Emmitt Smith and Bob Hayes' No. 22, or a backup QB sport Roger Staubach's No. 12? Not at all. What the Cowboys do, in the special case of numbers 8, 12, 22, and 74, is say they are officially already in use. This even extends to the point that these numbers aren't used in off-season workouts or training camp.

The only exception there is Bob Lilly's No. 74. Because of the restriction of offensive linemen using numbers 50-79, which are also used by linebackers and defensive linemen, it creates a shortage of usable numbers on a 90-man roster. However, when the club trims down to a 53-man roster for the regular season, the No. 74 goes back out of circulation.

There are some numbers that are rarely handed out, and the doing so is almost an anointing. No. 88 became iconic during receiver Drew Pearson's tenure from 1973-83. The jersey was never handed out again until a first-round pick from Miami in receiver Michael Irvin took it in 1988.

When Irvin retired, tight end Jackie Harris wore it for two seasons in 2000-01, and another tight end sported it in 2005 in Brett Pierce. However, when Antonio Bryant got the jersey from 2002-04 and Dez Bryant wore it from 2010-17, there was the expectation they would do great things for the Cowboys. Antonio didn't, but Dez finished his Cowboys stint as the franchise's leader in receiving touchdowns with 73.

Another jersey number that seems to find its way in circulation and probably shouldn't is No. 33. When the Cowboys traded running back Tony Dorsett in 1988, no other Cowboy wore it in the final season of the Tex Schramm and Tom Landry era.

However, in 1989, when Jerry Jones bought the team and hired Jimmy Johnson as coach, the number has been worn five times, usually by defensive backs. The only running back who wore No. 33 was Timmy Smith in 1990, but another Smith that season relegated him to the bench and made No. 22 a legacy number in Dallas.

Given that retiring jerseys is something other franchises do, along with being liberal with their ring of fame inductions, retiring jerseys may never become an official part of Cowboys policy. Dallas does have the Ring of Honor that serves as an official acknowledgement of inner circle greatness, but that doesn’t mean the jersey numbers that those players wore are always off the table. However, fans have certain numbers retired in their hearts, and sometimes that is simpatico with team policy.

Do you think the Cowboys should stop issuing the numbers of their very best or is the Ring of Honor enough? Share your thoughts with Mark on Twitter @therealmarklane.

Cowboys surprisingly shaky at linebacker ahead of free agency

Why Tom Brady to the Cowboys would be doomed to fail

The Cowboys have needs at quarterback beyond just getting Prescott signed

Exploring a pre-free agency NFL Mock Draft for the Cowboys