Carroll Shelby's heart for the automotive world thrives at Northeast Texas Community College, where the only school bearing his name exists. It's Totally East Texas. 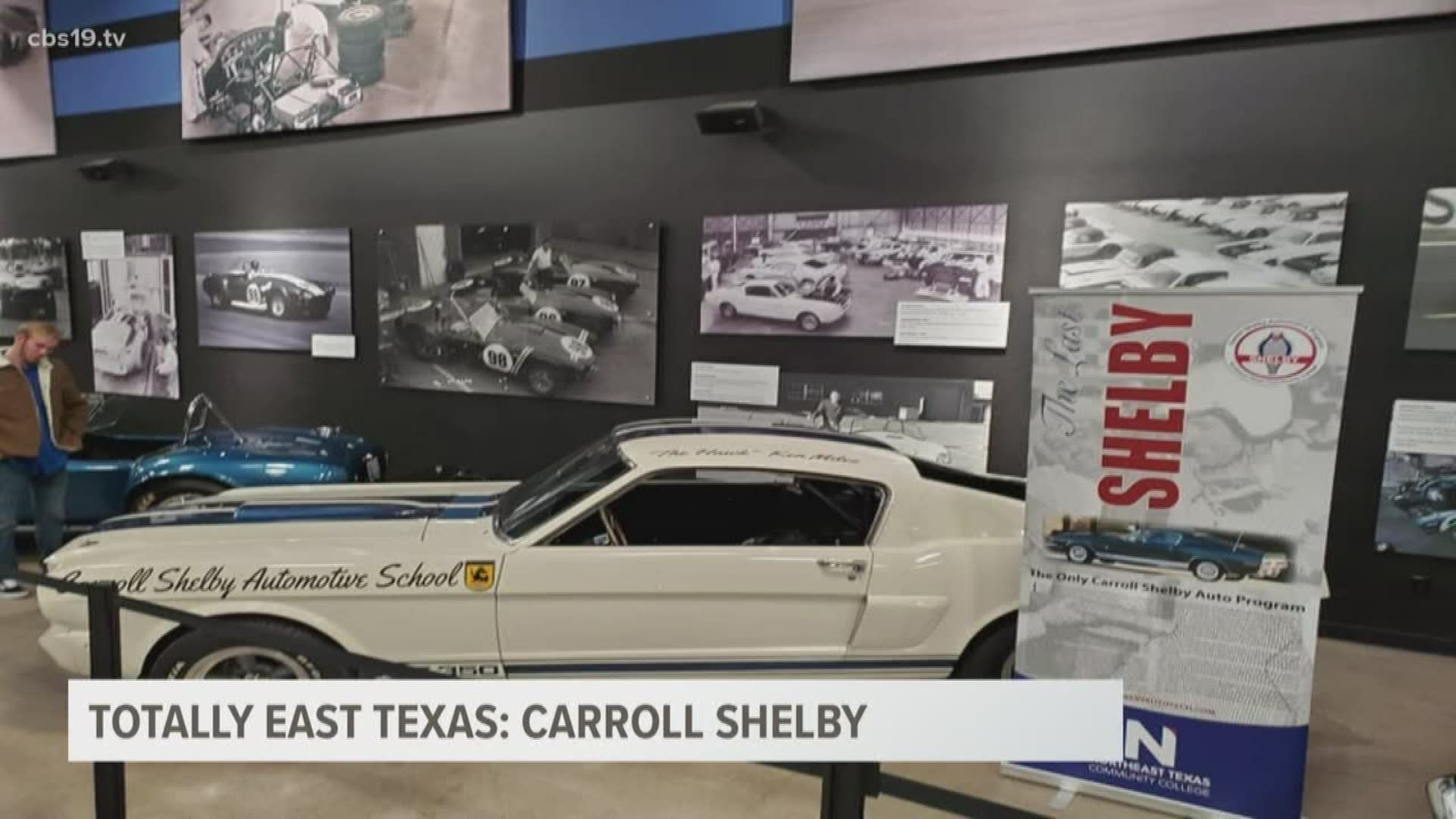 Carroll Shelby became a legend in the automotive and racing world when he helped Ford beat Ferrari at the legendary 24 Hours of Le Mans race, but his roots are deep in East Texas. So much so, he donated a large sum to the automotive program at Northeast Texas Community College.

The legendary race car driver and designer, Carroll Shelby likely could have chosen any automotive program in the country to support, but he embraced NTCC in Mt. Pleasant, Texas.

Shelby made that official back in 2007 at Northeast Texas Community College.

"Carroll actually was born in Leesburg. His dad was a mailman and he used to pull him around in a wagon," Luellen explained. "That's where his racing days started."

Shelby's need for speed served him well both in racing and his development of high performance cars. He is famous for pushing the envelope with cars like the Cobra, Ford GT, Series 1, Viper and his namesake: Shelby Mustangs.

Eventually, Shelby won the 24 hours of Le Mans in 1959 before being diagnosed with a heart condition.

"But he could still run race teams, so that's when Ford hired him," McCullough explained.

"His wheels were always spinning. He was always thinking about what's next," McCullough said. "As matter of fact, one of his famous lines is if you ever asked him which was his favorite car of all cars. His favorite car is the next one. That's sort of how he lived his life."

Fortunately for the college, he wanted to give back to the East Texas community he called home since he has a place in Pittsburg.

Each year since that conversation in 2007, the Carroll Shelby Found has given the college $50,000 for scholarships.

The college helps students get valuable experience in the automotive industry. A lucky few, like Christian Anker, got the opportunity to intern at Shelby in Las Vegas.

"It was more like we went out there to do exactly what they were doing. We worked on the cars," Anker said. "We built cars. We built trucks. We got to learn everything from the top to bottom and build trucks completely."

Christian also joined a group that includes Shelby Automotive students, instructors and program director, Ron Luellen at SEMA in Las Vegas this November, which they were invited to attend.

Traveling with them was a Shelby project car that both high school and college students worked to rebuild, a 1965 Mustang R-Model. The classic car was brought to the team by instructor, Tony Whitworth.

"Being the Ford nut he has been over the years, he had saved all the parts that he needed to basically build this car back," Whitworth said. "When we got there, I mean, people just, you know, fell in love with the car and the fact that it was put together by students. It was kind of a tribute to Carroll and this movie about Carroll's life."

One of the lasting traditions with Shelby cars, all of the people who worked on it sign it. All the students at Northeast Texas Community College signed the car they worked on. The president of the Shelby Foundation, Carroll Shelby's grandson Aaron, also signed it.

Jon McCullough says he knows Carroll, who passed away in 2012, would be proud of what the program has become.

"When Carroll came back home, up until he passed away about six years ago, he would call me and asked me if I'd come get him and bring him out to the school," said McCullough

Everyone at the Shelby Automotive program knows they have big shoes to fill, and the new movie they saw in a private screening reminded them of that.

"You know, I learned that he had a lot of aspirations in life. He came from such a small place," Anker said. "It's turned into a place for kids like myself can come out here and aspire to be something bigger."

To date, Shelby's donations total over $900,000 to NTCC. The funds help ensure the program bearing his name, the Carroll Shelby Automotive Program, has everything it needs for students to be successful.

You can see more about Shelby's life in 'Ford v. Ferrari' and how he helped Ford stun the world driving away with first, second and third place at Le Mans.