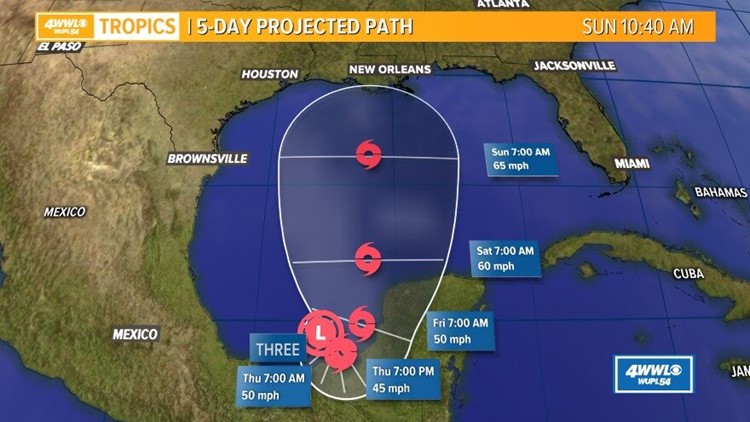 It could weaken to a tropical depression soon. It could then re-strengthen when a potential turn northward happens on Friday.
Author: Your Local Weather Experts
Published: 2:53 PM CDT May 25, 2016
Updated: 2:38 PM CDT June 3, 2020

It’s forecast to weaken to a depression soon as it hovers just over land through Friday.

Then the National Hurricane Center forecast shows it becoming a tropical storm again on Friday.

It starts its northward movement into the central Gulf on Friday night/Saturday.

Any direct impacts for our area look like Saturday night through Monday... but a lot of tropical moisture is surging our way already, which could result in some heavy downpours this week.

A Flood Watch was issued Wednesday morning that stays in effect all the way through Tuesday. Rainfall rates could reach 2-4 inches per hour in spots, and it's possible there could be 10 or more inches of rain from now through Tuesday.

As for direct impacts from Cristobal... if it turns north into the central Gulf and makes its way toward the Gulf Coast this weekend, we may get:

Landfall *may* be somewhere along the central Louisiana coast Sunday night or early Monday, but this could change.

The forecast still depends on where Cristobal heads which could be anywhere from Texas to the Florida Gulf Coast.

The uncertainty with this forecast is high. The storm will not move much from its current location until late Friday, so until then we won't know things for sure.

Regardless, we do expect the moisture from the southern Gulf of Mexico to surge north through early next week. This mean heavy rain seems like a guarantee at this point.

Check back for updates as the forecast will continue to evolve.

The official beginning of the Atlantic hurricane season was June 1. This season is predicted to be more active than average, due to factors like a potential La Nina event by September and warmer-than-average sea surface temperatures.

NOAA's forecast issued on May 21 predicts 13-19 named storms of which 6-10 would be hurricanes and 3-6 would be major hurricanes (of Category 3 or higher on the Saffir-Simpson scale).

Tropical Storm Arthur and Tropical Storm Bertha which formed in May were the first two named storms of the year in the Atlantic. This is the sixth year in a row with a named storm forming earlier than the official start of hurricane season.

► Track the tropics, live updates from Your Local Weather Experts delivered directly to you throughout the hurricane season by downloading the FREE WWL-TV News app now in the IOS App Store or Google Play.

2020 Hurricane Season forecast to be active

The Atlantic Hurricane Season begins on June 1st and predictions are being made.

Typically when we have an El Nino wind shear is stronger and hurricane season can be less active. The reason for this above-normal forecast is the due to the lack of El Nino expected and the possibility that La Nina develops. This could lead to weaker wind shear over areas where tropical cyclones form.

Remember, it only takes one storm for it to be an active season for our area. The Gulf Coast has seen impacts during quiet seasons and no impacts during busy seasons. It's important to have a plan regardless of the forecast.