Laura makes landfall in Louisiana as a major Category 4 hurricane

At least two deaths were confirmed in Louisiana early Thursday, including a teenage girl. 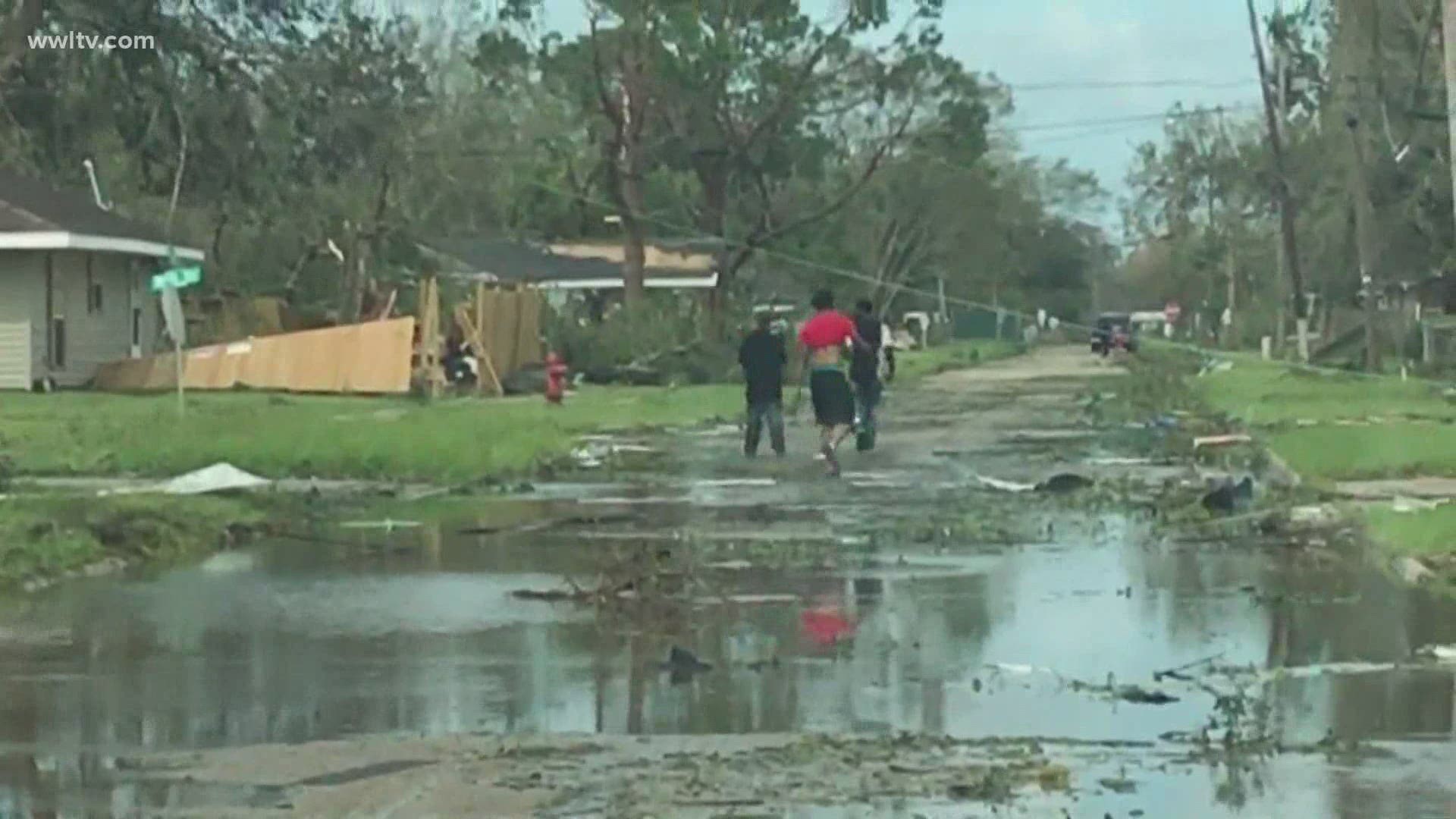 The storm had sustained winds of 150 mph when it hit the coast of Cameron, Louisiana.

We've now learned a 14-year-old girl in Louisiana was the first reported death in the U.S. directly caused by the storm. A spokesperson for Louisiana Governor John Bel Edwards said early Thursday the girl died after a tree fell on her home. The girl lived in Vernon Parish, reported WWLTV. At another location in Louisiana, a second death was reported when a man was struck by falling tree.

“We do expect that there could be more fatalities,” a spokesperson for Louisiana Governor John Bel Edwards said.

WHAT'S NEXT: Here's where Laura is going after landfall

Laura’s howling winds battered a tall building in Lake Charles, blowing out windows as glass and debris flew to the ground. Police spotted a floating casino that got loose and crunched against a bridge. But hours after landfall, the wind and rain were still blowing too hard to check for survivors.

Right now, it appears the Lake Charles area got the worst of the damage:

On top of damaged roofs and toppled trees, a large chemical fire broke out reportedly at a company that makes pool supplies. The fire was reported just west of Lake Charles, forcing a shelter-in-place for nearby residents. It's not yet confirmed that the storm directly caused the fire.

Texas, including Beaumont and Port Arthur, appear to have been spared from the worst of the storm's impacts as landfall occurred farther east. Farther east in Orange, Texas, video showed large trees were knocked down overnight with some damage to structures, including this church: 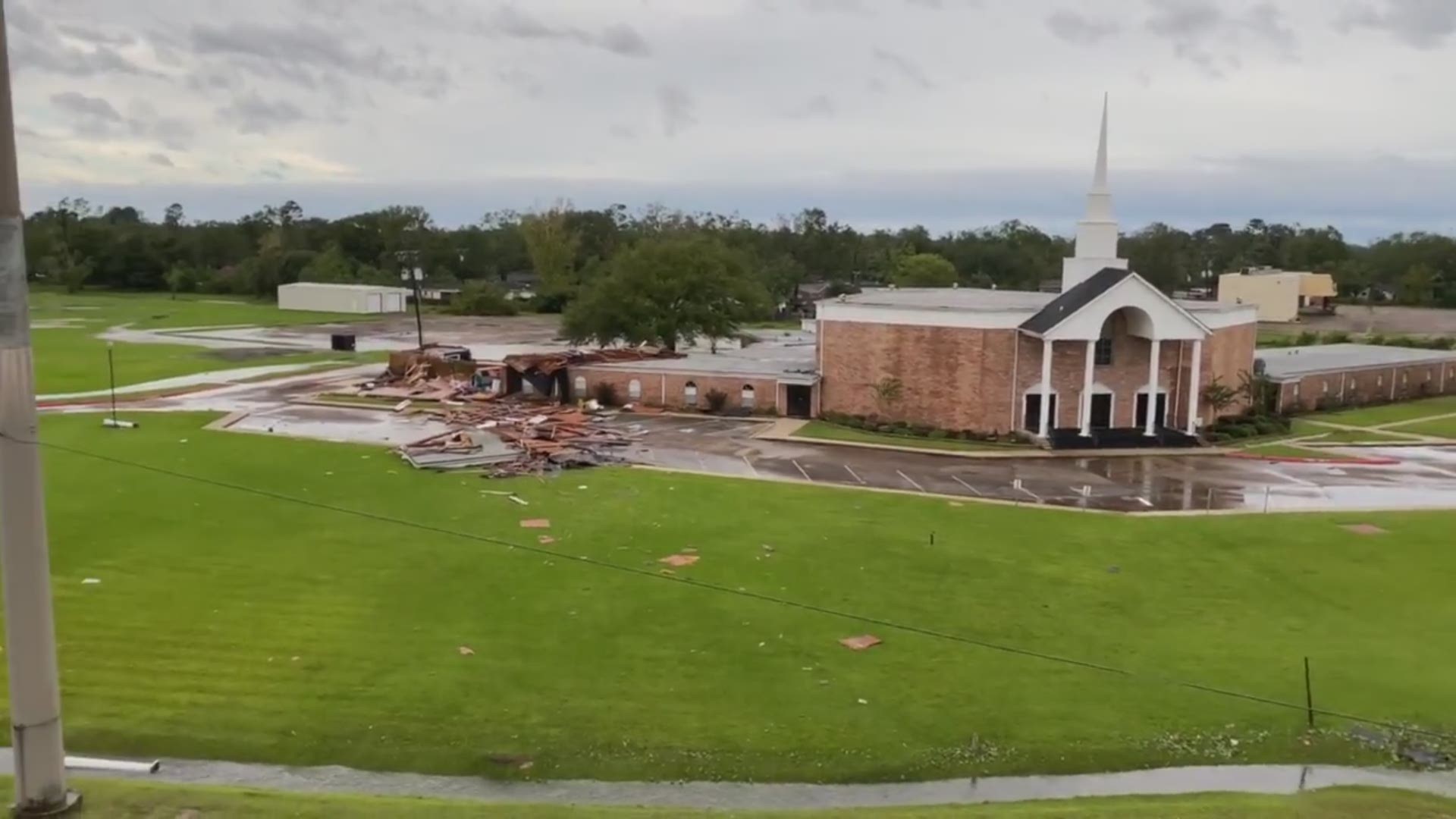 Earlier in the morning and overnight, Laura brought a catastrophic storm surge to the Louisiana coast. Forecasters say this surge could penetrate up to 40 miles inland from the immediate coastline, and floodwaters won't fully recede for days. 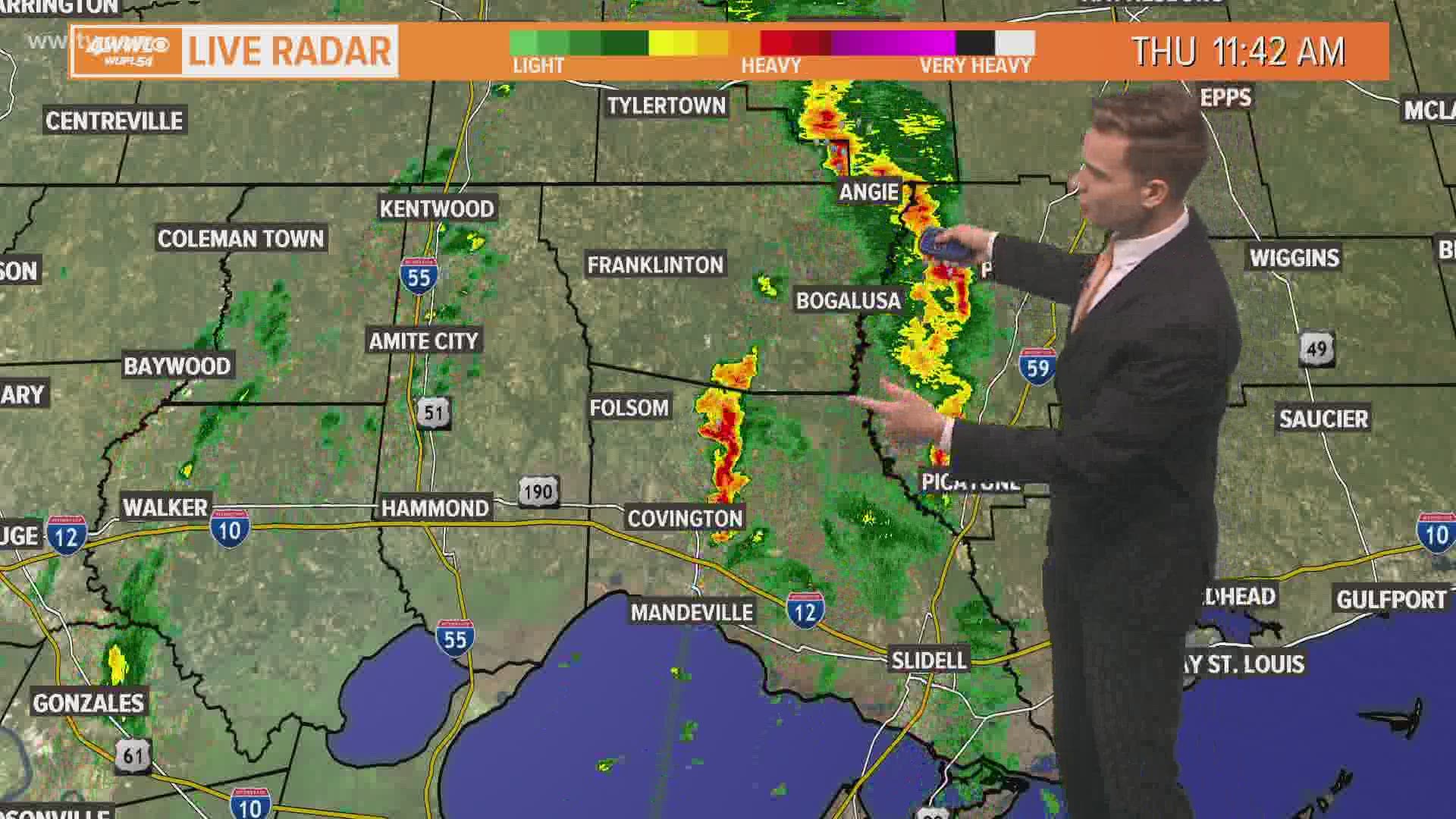 More from the Associated Press:

Hurricane Laura made landfall in southwestern Louisiana as a ferocious Category 4 monster early Thursday, swamping a low-lying coast with ocean water that forecasters said could be 20 feet deep and unsurvivable.

The National Hurricane Center said the storm, which intensified rapidly Wednesday before plowing into land, came ashore at 1 a.m. CDT near Cameron, a 400-person community about 30 miles (48 kilometers) east of the Texas border.

Authorities had implored coastal residents of Texas and Louisiana to evacuate, but not everyone did before howling winds began buffeting trees back and forth in an area that was devastated by Rita in 2005.

“There are some people still in town and people are calling the building but there ain’t no way to get to them,” Tony Guillory, president of the Calcasieu Parish Police Jury, said over the phone as he hunkered down in a Lake Charles government building that was shaking from the storm.

Guillory said he hopes those stranded can be rescued later Thursday but he fears that blocked roads, downed power lines and flooding could delay that process.

Video and photos on social media showed torrents of rain flying sideways past street lights in Lake Charles, and streets covered with water closer to the coast. A sudden storm surge knocked over cameras meant to capture the hurricane’s effects.

With hours of violent weather ahead, officials said the extent of destruction likely wouldn't be clear until daybreak, when search and rescue missions will begin.

Drawing energy from the warm Gulf of Mexico, the system arrived early Thursday during high tide as the most powerful hurricane to strike the U.S. so far this year.

“It looks like it’s in full beast mode, which is not what you want to see if you’re in its way," University of Miami hurricane researcher Brian McNoldy said.

Maximum sustained winds increased to 150 mph (241 kph) before nightfall, and forecasters said up to 18 inches (46 centimeters) of rain could fall. Forecasters issued a string of tornado warnings as the storm pushed on to land, but there were no immediate reports of damage. More than 200,000 homes and businesses were without power in Texas and Louisiana.

Earlier Wednesday, winds picked up as shoppers rushed into a grocery store in low-lying Delcambre.

Officials said at least 150 people refused pleas to leave and planned to weather the storm in everything from elevated homes to recreational vehicles in coastal Cameron Parish, which could be completely covered by ocean water.

“It’s a very sad situation,” said Ashley Buller, assistant director of emergency preparedness. “We did everything we could to encourage them to leave.”

A Category 4 hurricane can render wide areas uninhabitable for weeks or months and knock out power for just as long. The threat of such devastation posed a new disaster-relief challenge for a government already straining under the coronavirus pandemic. The parts of Louisiana that were under evacuation orders included areas turning up high rates of positive COVID-19 tests.

The National Hurricane Center kept raising its estimate of Laura’s storm surge, from 10 feet (3 meters) just days ago to twice that size — a height that forecasters said would be especially deadly.

For some, the decision to leave home left them with no place to stay. Wary of opening mass shelters during a pandemic, Texas officials instead put evacuees in hotels, but Austin stopped taking arrivals before dawn because officials said they ran out of rooms. Other evacuees called the state's 211 information line and were directed to Ennis, outside Dallas, only to be told after driving hundreds of miles no hotels or vouchers were available.

Taniquia Ned and her sisters showed up without money to rent a room, saying the family had burned through its savings after losing jobs because of the coronavirus. “The COVID-19 is just totally wiping us out,” said Shalonda Joseph, 43, a teacher in Port Arthur.

Edwards lamented that the storm meant suspension of community testing for COVID-19 at a crucial time — as elementary and secondary schools in Louisiana open and students return to college campuses.

Laura was expected to cause widespread flash flooding in states far from the coast. Flood watches were issued for much of Arkansas, and forecasters said heavy rainfall could arrive by Friday in parts of Missouri, Tennessee and Kentucky. Laura is so powerful that it's expected to become a tropical storm again once it reaches the Atlantic Ocean, potentially threatening the Northeast.

Becky Clements, 56, evacuated from Lake Charles after hearing that it could take a direct hit. She and her family found an Airbnb hundreds of miles inland. Almost 15 years have passed since Hurricane Rita destroyed the city.

“The devastation afterward in our town and that whole corner of the state was just awful,” Clements recalled. “Whole communities were washed away, never to exist again."

Laura closed in on the U.S. after killing nearly two dozen people on the island of Hispaniola, including 20 in Haiti and three in the Dominican Republic, where it knocked out power and caused intense flooding.

Laura will be the seventh named storm to strike the U.S. this year, setting a new record for U.S. landfalls by the end of August. The old record was six in 1886 and 1916, according to Colorado State University hurricane researcher Phil Klotzbach.

The Associated Press contributed to this story.