CBS19 WEATHER: What will spring look like in East Texas according to the LRC?

This will be the first spring CBS19 uses the Long Range Cycling (LRC) theory here in East Texas. 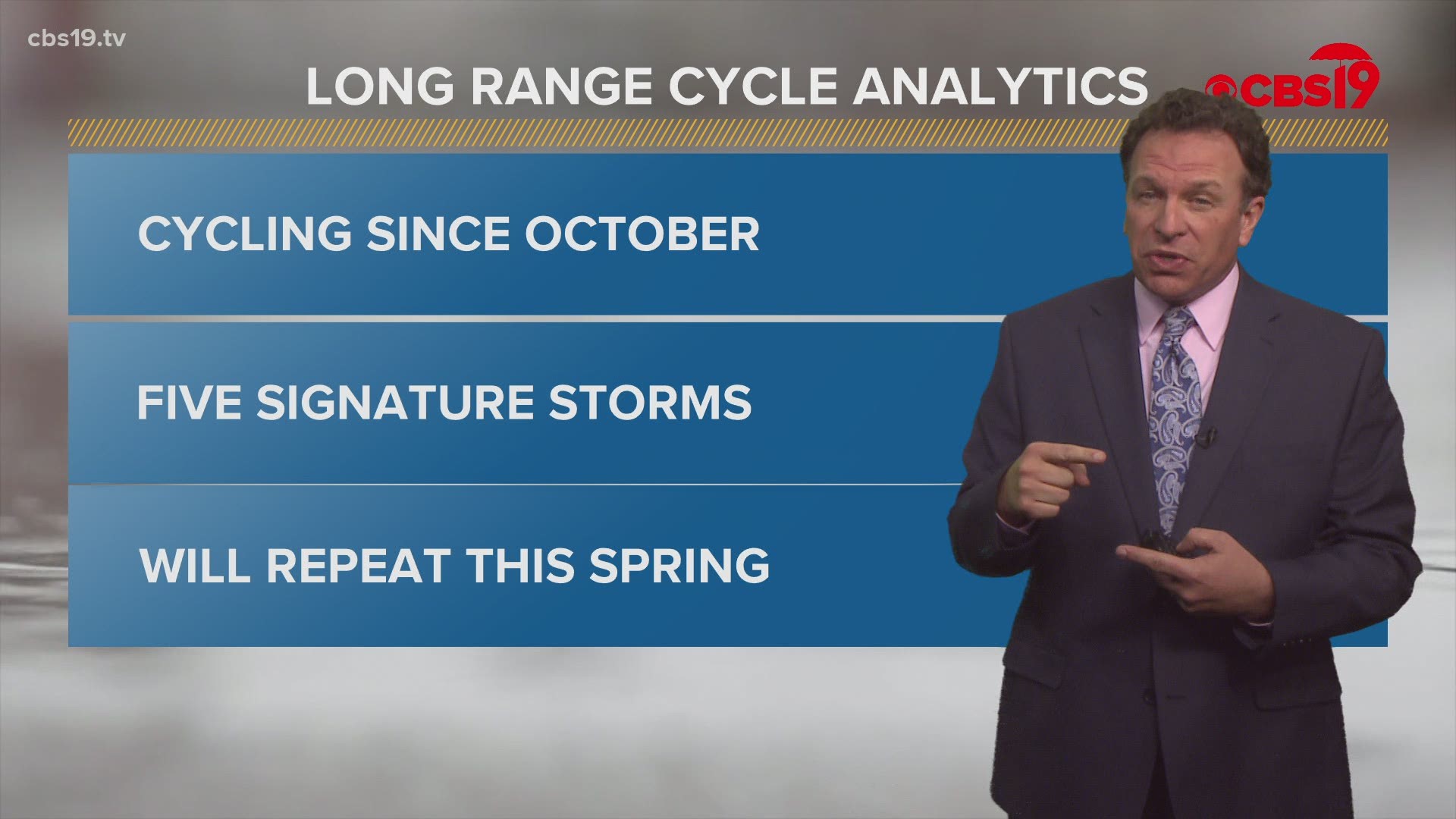 We think of winter as lasting between Dec. 1 - Feb. 28. Why? Because weather patterns tend to be more winter-like in between these two dates. More cold air outbreaks and chances for snow.

Remember Jan. 10? And consider this, the average high temperature in Tyler climbs from 64 on March 1 to 68 degrees by the first day of astronomical Spring on March 20. In other words, very spring-like. So why not look ahead to spring and we are doing that with this weather blog.

This will be the first spring CBS19 uses the Long Range Cycling (LRC) theory here in East Texas to predict active severe weather setups and whether or not Spring will be wet or dry, hot or cold. Before we go forward let’s review the LRC.  A unique weather pattern starts cycling every Autumn. We look for anchor storms that will form the basis for our extended outlooks. These signature storms will repeat at least two more times during the spring.  This year’s LRC is entering its fifth cycle. Here’s a quick review.

Here’s an example of one of those signature storms that will repeat. The Jan. 10 snowstorm. Here’s a snapshot of where the surface low was located at 7 p.m. on Sunday, Jan. 10.

A similar reflection of the above storm occurred in Oct. Remember Hurricane Delta? When we see anchor storms repeat like this, our confidence grows that another storm will be in this region in the future. According to the LRC, this storm should appear again in the middle of April and at the end of May or in early June. Considering the time of year and location of the storm, it would appear the April version of this storm will provide  a very rainy day for filing your taxes. As we said, this is one of five signature storms that will cycle through the region at least twice between the end of February and the end of May. So using the LRC, here’s the spring outlook.

That’s the overall outlook but let’s break this down and give you some dates to circle on your calendar. If you have outdoor plans, baseball tournaments or weddings scheduled on one of these weekends, you’ll want to keep an eye on the weather leading up to those events and perhaps have a plan B. There are three signature storms to watch for in the month of March.

A note about March before we move on. Look at the calendar above and see March 5 - March 9 highlighted. This doesn’t mean there will be severe weather each day. Rather, this was an extended period of active weather where a slow moving storm could take several days to cross the central and southern plains. A bigger setup may occur in the middle and again at the end of March. OK, let’s move on to April.

The active weather pattern at the end of March looks to spill over into April. The first five days of the month could include heavy rain. You’ll recall the end of December when we picked up half of our month’s rainfall in just two days. Also, notice the days highlighted in blue. These are days where temperatures could be well below average as a chilly north wind brings in a few raw & perhaps rainy days for the beginning of the month.  Four signature storms should result in a wetter than average April. Severe weather in East Texas usually peaks during the month of April and it appears that will happen again this year. Now, onto May.

It may appear as if there are several days where rain and thunderstorms may interrupt outdoor plans in May. But if severe weather follows climatology then many of our rain chances in May will be associated with thunderstorm complexes that have formed over the central plains and reach East Texas during the late night or early morning hours. We have several days highlighted as there are several storms forecast to move through the central United States during May. And once again there could be an unusually cool wave around the 11-12. Those days are highlighted in blue.

So there you have it -- our spring and severe weather outlook using our exclusive LRC.

Also, make sure to catch our CBS19 weather special in early March.

RELATED: When will the winter weather end in the U.S.? A national spring forecast