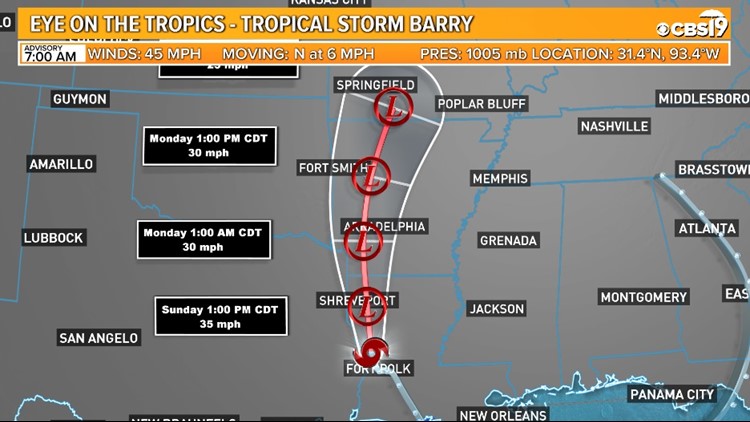 TRACKING BARRY: What it means for East Texas

As Barry continues to push onshore and closer to East Texas, it looks likely that we will see some impacts from the storm. Here's what we know as of right now.
Author: Michael Behrens, Joel Barnes
Published: 3:07 PM CDT July 10, 2019
Updated: 9:17 AM CDT July 14, 2019

The CBS 19 Weather Team has been tracking Barry in the Gulf of Mexico. It briefly made it to a Category 1 Hurricane, before making landfall near Intracoastal City and weakening back to a Tropical Storm.

This storm system will impact our weather in East Texas this weekend, but the worst portions of this storm will stay in Louisiana. There is still some uncertainty around how this storm will track now that landfall has occurred, so the impacts to East Texas could still change over the next few days.

Here is what we know as of now.

As of 3:00 PM CDT Saturday Barry was pushing onshore and had been reduced from a Category 1 Hurricane back to a Tropical Storm. Landfall took place early this afternoon near Intracoastal City in southern Louisiana. It will continue northward/northwestward and could bring some heavy rainfall and gusty winds to some East Texas counties this weekend.

Eastern parts of East Texas are still within the cone of uncertainty, which means we can't completely let our guard down yet.

At this time there are no watches or warnings anywhere along the Texas coast, although portions of the coast near from Lake Charles are under a Tropical Storm Warning and areas further south are under a Hurricane Warning.

Barry has peak winds as of this time of 45 mph.

Links You Can Use:

We are watching Tropical Storm Barry, which was a Category 1 Hurricane, push onshore this afternoon. Where this storm goes has major impacts on our weekend forecast. The worst parts of the storm will miss East Texas, but showers and storms this weekend are still expected from Barry as it moves onshore.

The greatest threats with Barry will be winds gusting up near 45 MPH and flash flooding due to rain totals up to 10 inches in some locations. This risk will not be in East Texas.

The worst threats to East Texas will be thunderstorms, brief gusty winds, and brief heavy rainfall.

While we know where Barry came onshore, uncertainty remains about what path it will follow moving over land. Checking back into the forecast all weekend long will be crucial to your planning.

Gusty winds will also be possible for part of East Texas thanks to Barry from Saturday through early Sunday.

Sunday will see continued chances for showers and storms related to Barry, but it looks like lighter and steadier rain is also a possibility. Shower and storm bands will remain possible as well. Some of these could be heavy at times.

Expect mostly cloudy skies and a 40% chance for showers and storms as of this time. Temps will only make it to the mid-80s. The spots with the heaviest and longest lasting rainfall may see temps closer to just 80 degrees.

Some of this moisture could linger around with showers and storms into Monday as well. Right now this chance is only around 30% with partly cloudy skies. Temps will be in the mid to upper 80s Monday.

Rainfall is expected to be gone from our region by Tuesday.

What We Don't Know:

What Do You Need to Do?:

Stick with CBS 19 heading through this week. We will have you covered with the latest information!

Do you have a weather report or pictures you would like to submit to the CBS19 Weather team? You can email news@cbs19.tv and visit our Facebook or Twitter pages..