'I thought I was going to wake up with Jesus': Family shares faith and hope one year after storm

It's been almost a year since one family lost everything in the Van Zandt County storm, and are sharing their story of faith and hope as they are almost finished rebuilding. 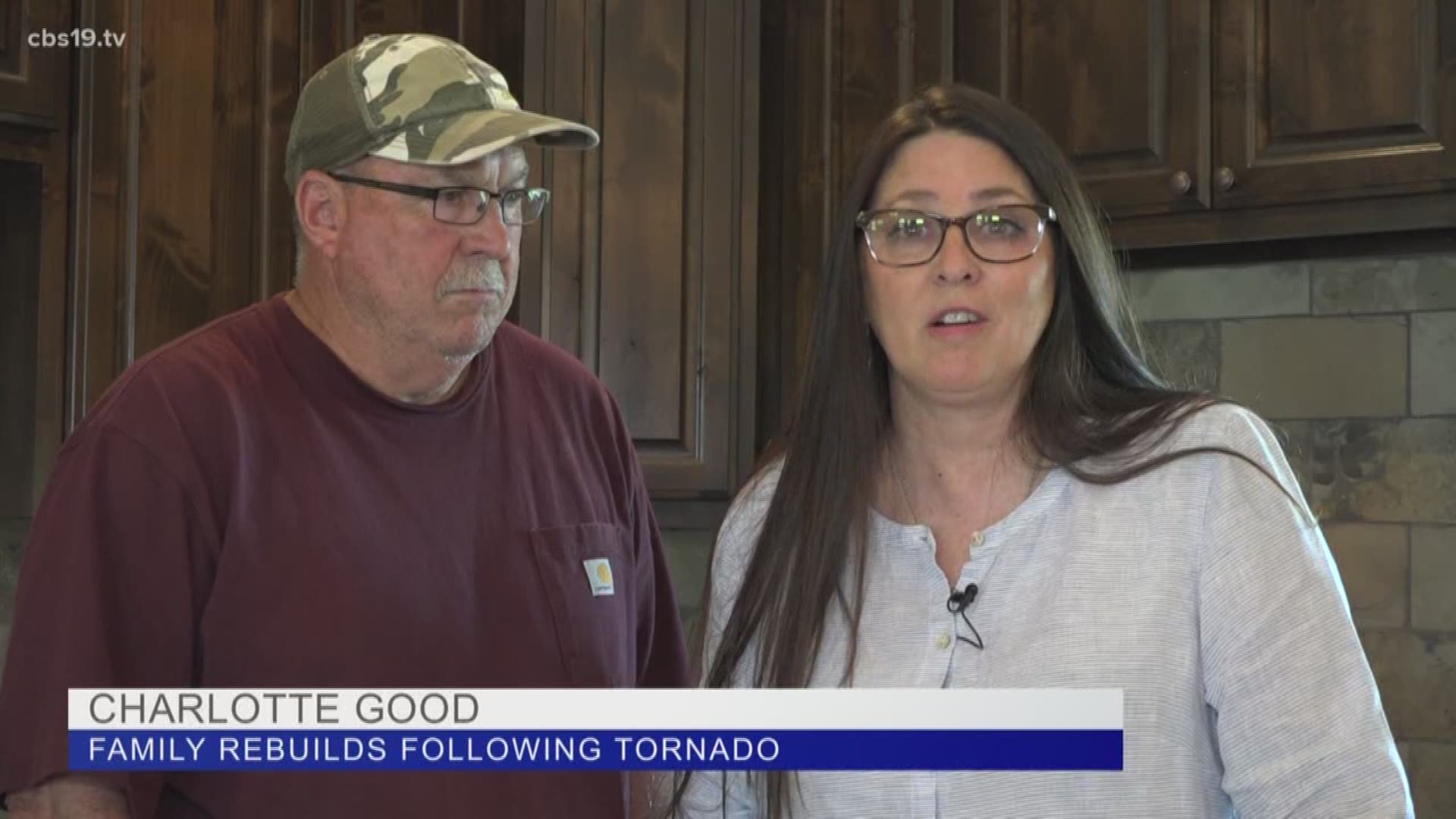 VAN ZANDT COUNTY — One year after the deadly tornado outbreak in Van Zandt County, the Good family is getting ready to move into their newly built home.

On April 29, 2017 Charlotte Good was pulled out of her house by a tornado.

“As I go into the air something hit me in the head so hard I thought I was going to wake up with Jesus,” said Good.

At the time of the storm, Charlotte's husband, Don Paul, was on shift at the Garland fire department.

Unable to reach Charlotte, he says he knew something was wrong. That’s when he contacted a neighbor who lived down the road.

“He said Don, a tornado has come through here and it hit us very hard," said Don Paul as he described a conversation with his neighbor. "He said that half of his house was gone, he said let me roll around the corner and see what I can see up there and he came back on the phone and said Don your house is gone."

Don Paul rushed home but was never able to get there due to the downed power lines and trees covering the road.

Don Paul said, thankfully, a family friend was able to pick Charlotte up and help her until he could get through.

“I didn't have any broken bones other than my nose," said Charlotte.

"It looked like she was shot with a shot gun,” said Don Paul.

With Charlotte hurt, it wasn’t until the next day that Don Paul saw the destruction for himself.

“I was just in awe because there was no structure standing out here,” said Don Paul. “Our whole house and its contents had been rolled up and deposited 30 feet away.”

Unfortunately losing their house isn't the only heartbreak the Good family has had to endure. 18 months before the storm, the Good family lost their son, Zach. The 23-year-old died after falling off a third-story balcony.

“Losing our son was way worse than losing all our worldly possessions because losing the possessions it’s just stuff but losing your son, it’s part of you," said Charlotte. "It was like a piece of our heart went.”

Charlotte said, there is no doubt in her mind, that Zach was looking over her the day of the storm.

Zach’s dog, named Zayne, also miraculously made it through, and the black pickup truck that once belong to him was the only vehicle that wasn’t destroyed that night.

“The running joke among his friends is that he was here to save his mom, his dog and his truck,” said Charlotte.

The family said Zach isn’t the only angel that’s helped them recover. Even strangers have stepped up to help them get back some on their feet.

“It was so wonderful how the community pulled together, and the majority of these people that helped, that drove up and offered their services, we didn’t know," said Charlotte. "They were just strangers or Canton angels that came through and helped everyone.”

Charlotte and Don Paul said when they move into their new home, they plan on hosting a party to thank everyone who has showed them kindness.