Why meteorologists are wearing purple on 'Pi Day'

Pi Day is celebrated on March 14 or 3.14 but it's also a day highlighting women in STEM careers. 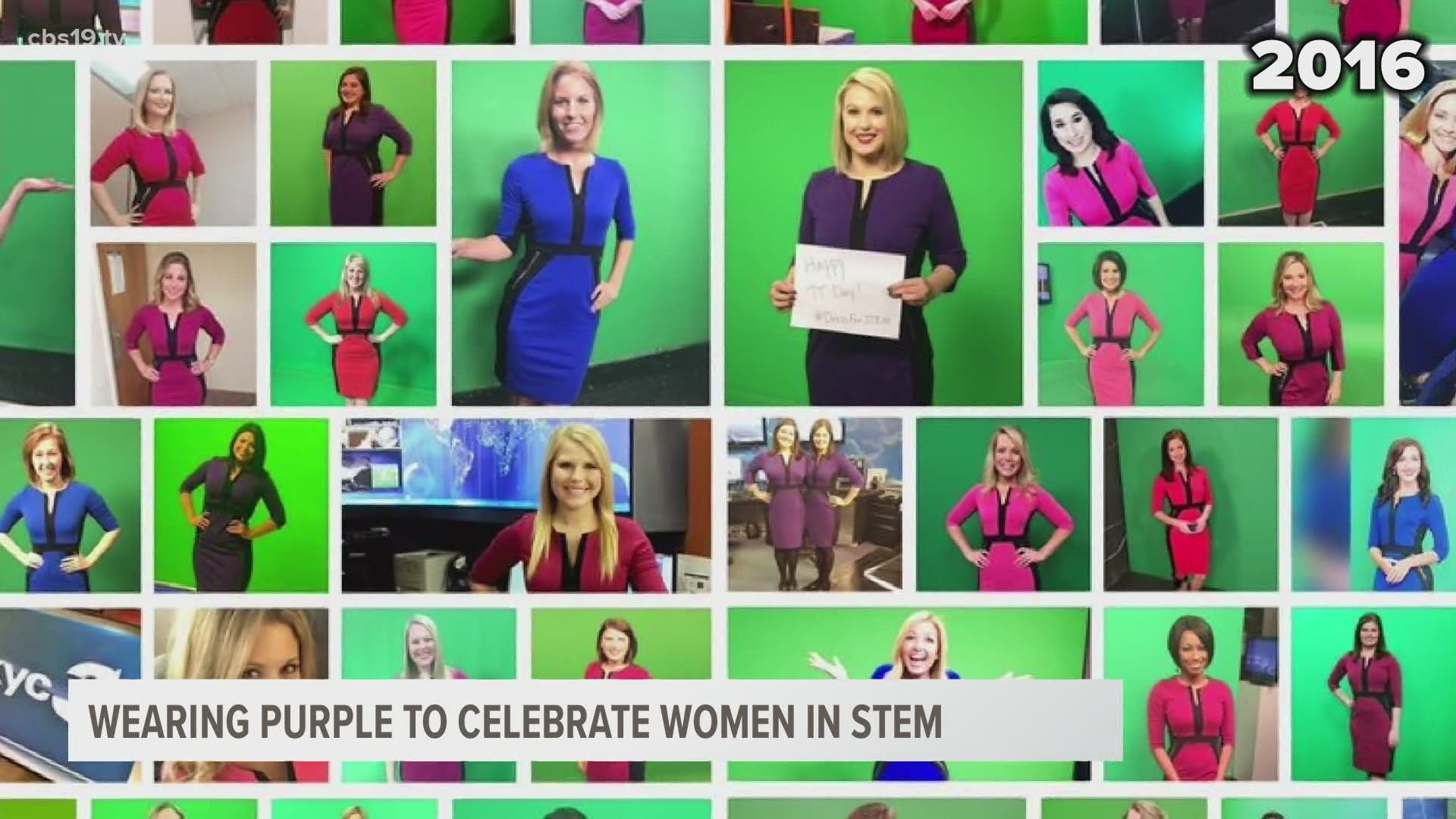 TYLER, Texas — It's a movement that's now in its sixth year.

Dress for STEM is celebrated on Pi Day which is this Sunday. And we're not talking about the pie you eat at dessert. Pi is the ratio of a circle's circumference to its diameter, and it's a time for math enthusiasts to show off how many indefinite digits they know of the constant.

A few female meteorologists took the holiday based on mathematics and applied a new meaning - celebrating the smaller group of women who work in STEM-related fields while encouraging young ladies to follow their dreams.

The movement is known as "Dress for Stem" is now in its sixth year, and its story has a funny beginning.

Around 2015, an inexpensive dress hit the online market and appealed to female meteorologists everywhere. Meteorologist and Dress for STEM organizer, Julia Leopold, says that the dress quickly gained popularity among the female broadcast community.

Credit: kytx
Amazon $23 dress from imgur. Female meteorologists across the country have created their own sisterhood of the traveling dress. It all started in a private Facebook group for weather women who share tips of the trade as well as good deals on outfits -- as most stations have very strict dress codes. Bree Smith, a meteorologist at KSDK in Ohio, discovered a pencil dress on Amazon that was not only affordable -- at just $22.99 -- but also was made out of good-quality fabric, had bright colors and long sleeves. She posted a link to the group and it took off shortly after. To prove how great and universally flattering the dress was, a Texas-based meteorologist put together a collage of all the women wearing it and shared it on Facebook over the weekend. “More than 50 of us purchased the dress, so if you travel and watch the news, you might see something familiar,” Jennifer Myers wrote in the post along with a photo of her wearing it in blue. The image has since gone viral, sparking a new #TheDress hashtag following the color-changing cocktail dress that had people all over the world fighting about whether it was blue and black or white and gold. “In case you were wondering...yes, I ordered the dress, too. Blue,” Kerrin Jeromin, a meteorologist in Florida, tweeted. “Yes, I own #thedress!” Liz Dueweke wrote. “But at $23, I just couldn’t say no.” The dress comes in seven jewel-toned colors and has a 4.5-star rating on Amazon, with many women commenting that it fit like a glove and shows off their curves. “It’s risque because it’s form-fitting, but not trashy because I’m pretty well covered,” one woman wrote. “There's enough cleavage and leg to keep things sexy, but I don’t feel like I’m on display.” On Twitter, some of the meteorologists who purchased the dress pointed out that long-sleeved number looks similar to an outfit characters would wear on "Star Trek." “We’re all science geeks anyhow!” Randi Rico tweeted with a photo of herself wearing it in red. The

"A person found a dress it was only $23 and it met all of the criteria that you need to meet when you’re an on-air meteorologist," she said.

Finding the right dress to wear, at the right price can be challenging when you're on camera, but this dress checked a lot of boxes for women in the same field.

"It just spread like wildfire, everyone just started wearing it, everyone started purchasing it and it looks fantastic on all of us, it meets all of the requirements it needs to meet to be on camera, and we just loved it," Julia said.

The story goes beyond an article of clothing. The ladies in the female broadcast group decided to use the popular dress to bring awareness towards the large disparities in the fields of science, technology, engineering, and math.

"There are so many young girls that are in elementary school-age group that are really passionate about science and math, and they love the fields somewhere in muddle school that starts to drop off and research shows that’s because of lack of positive female role models, and exposure to inaccurate gender stereotypes,” Julia said.

Since 2015, Leopold and other female meteorologists have been promoting dress for STEM by wearing purple on Pi Day and you can participate, too.

Wear your best purple this Sunday, March 14, or Monday, March 15, and send your photos to cbs19 with the hashtag #DressforSTEM

RELATED: Crushing deep freeze was expected but US was unprepared, weather experts say 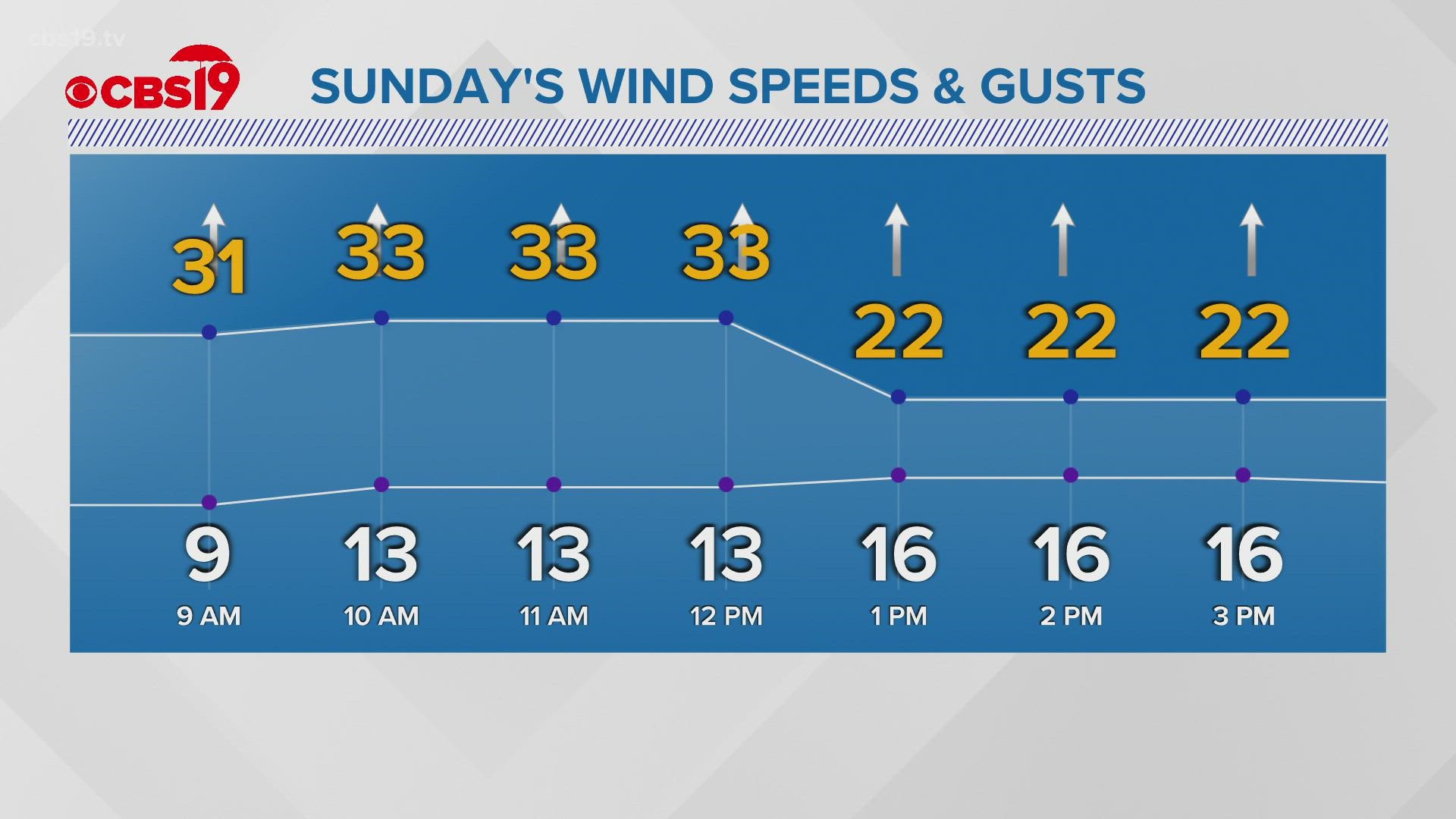 Sunday will be warm and breezy with an isolated rainstorm possible