East Texas family claims they were "ripped off" by contractor

An East Texas family claims they were ripped off by a contractor. After paying the full price for a barn, they were left with a slab of concrete and empty checkbooks. 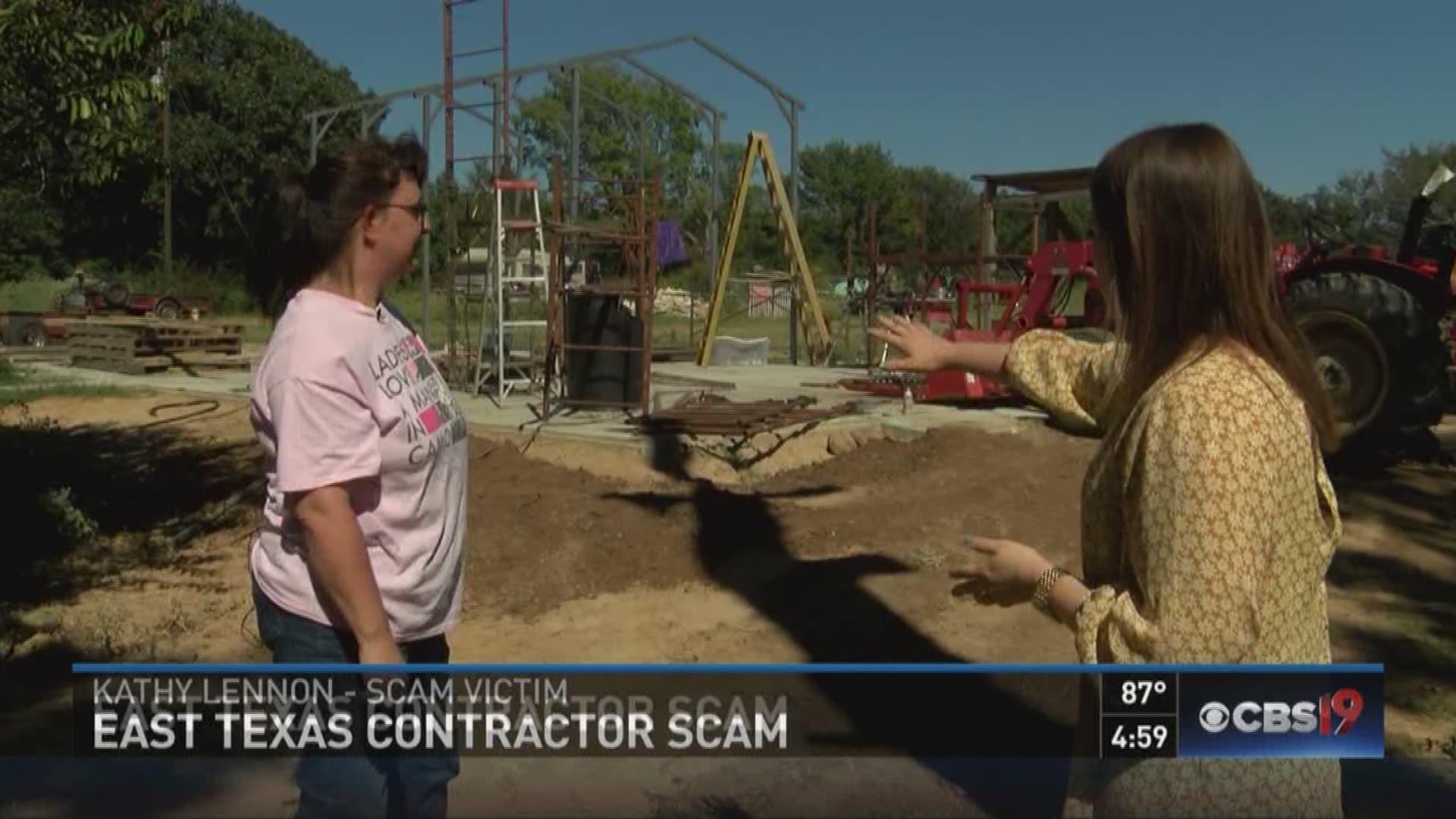 An East Texas family claims they were ripped off by a contractor. After paying the full price for a barn, they were left with a slab of concrete and empty checkbooks.

All Kathy Lennon said she wanted was to surprise her father with his dream barn.

"That was his ultimate dream. To have a barn for his welder, his cutting torches," Kathy Lennon said.

The Lennons heard about contractor Lonnie Burges from a friend, who said he was a good guy and "spot on" with what he is doing. The Lennon's thought this was enough reassurance, so they made a phone call.

A total of $16,000 was paid, and the only thing the family has is a concrete slab. It was finished in July.

It took Burges three months to pour the concrete, when the family told me he quoted four weeks, start to finish.

Mrs. Lennon said he disappeared and now he will not return any phone calls.

"He said he was filing for bankruptcy," Kathy said. "We felt bad. We thought we knew the guy. He would come over and just see how we were doing unannounced - like a friend."

CBS 19 went to the address listed for Lonnie Burges General Contracting in Mineola. This turned out to be his home. Then we made a phone call to ask why the barn for the Lennon's was never completed, despite paying the full price disclosed in the contract.

At first, he told CBS 19 he was no longer a contractor. He further explained the Lennon's went back on an original agreement, which is why he did not finish the project.

The contract is clear. A total of $16,000 was paid for a job left unfinished. For the Lennon's, a lesson learned.

"Don't pay for anything until the work is done. That's where we fell short," Scott said.

Looking on the Better Business Bureau website, the name pops up as "Lonnie Burges General Contracting." However, the Lennon's found him as both "Burges Building Company" and "Lonnie Burges Construction."

There is also a complaint on Ripoffreport.com from 2006 where a woman from Tatum wrote:

"We had a signed contract with Mr. Burges dated 1-29-06 to construct the slab for our new house. He did not even follow the quoted materials to be used. He skimped on the materials by not using what he quoted. He kept putting off the concrete pour date, he always had all these excuses, he refused to even follow the slab specifications as stated from the house plans, he said he could handle the entire job as far as slab, plumbing, construction of the house, staining the slab and whatever else we so desired. When we asked him for his insurance certificate he kept blowing us off on it. Needless to say he never came thru with it because he never had insurance or the license to perform the plumbing…This scum bag got $5500.00 out of us and we got nothing!!! He also sprays diesel fuel on the ground for termite treatment!"

Michele Mills with the BBB said contractors will look for emotional pulls. In this case, Burges told the Lennon's he was filing for bankruptcy, which turned out to be false.

"They may say they've had a tragedy - or that they may have to file bankruptcy - things of that nature to make you feel sorry for them and want to help them," Mills said. "If they're a dishonest contractor, they know they can complete some of the work without repercussion."

Mills said if a contractor completes some of the work, criminal charges cannot be filed against them.