Possession of between one and four grams of THC is considered a third-degree felony and can carry a prison sentence between two and 10 years. 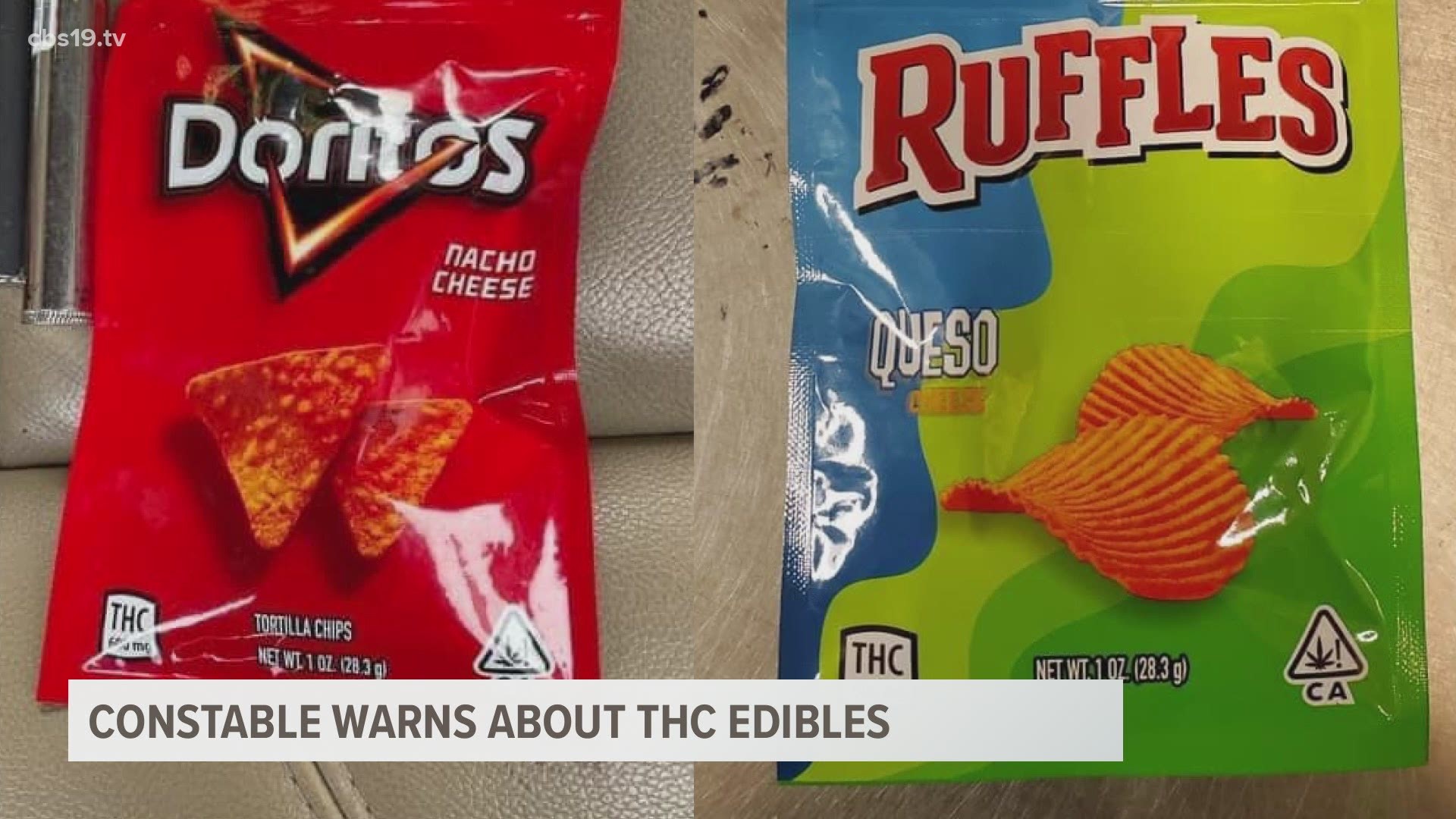 HAWKINS, Texas — It used to be pot brownies, now other THC-infused snacks and candies that look similar to name brand goods have become a growing trend. However, as marijuana remains illegal in Texas, a local constable is reminding and warning his community about these products.

Wood County Precinct 3 Constable John McQueen first saw the THC edibles from a law enforcement Facebook post, and after recent busts in East Texas, he decided to make his own post.

"The main thing that concerned me was the that it's packaged that kids would recognize as chips or candy," McQueen said. "There's Skittles, there's Nerds Ropes, all kinds of things."

Parents and school officials please take note and make yourselves aware. Now there are THC candy and chips which at first appear to be normal, however they have a THC logo on them.

Posted by Constable John McQueen on Tuesday, May 11, 2021

He said the most concerning part to him was the packaging, as it could easily be mistaken for regular chips or candy. From his post, McQueen said it seemed that some people weren't aware these products were out there and some thought they were fake completely.

"I don't think a parent is going to intentionally give these to their kids, but if there's a parent that partakes in the substance, and then they have children, and they see them, they're not going to look at the THC logo on the bottom," said McQueen. "And no one is going to think they're not getting Doritos or candy."

Texas considers THC food products to be in a different penalty category than marijuana, the consequences of getting caught with one THC-infused gummy bear, which weighs less than four grams, could subject someone to 180 days to 2 years in prison. Texas Health and Safety Code Section 481.116 provides that the possession of less than one gram can result in a state jail felony charge.

Possession of between one and four grams of THC is considered a third-degree felony and can carry a prison sentence between two and 10 years and a fine of up to $10,000.

Rebecca Smith, the coalition program director for Next Step Community Solutions, said surveys taken in 2020 pre-pandemic though show that marijuana use is down for East Texas teens.

The nonprofit's East Texas Substance Abuse Coalition works to educate teens and parents about the effects of substances like alcohol, vaping and cannabis.

"Marijuana is down at 9%, so we want to keep it low, we want to get it even lower," Smith said. "We definitely want to educate students about the harms that THC can have on them, particularly as an adolescent, we know that the teen brain is still developing. And we talk to them about alternative coping skills because a lot of times teens will use these substances to self-medicate if they're going through a hard time."

Smith said what might surprise many parents is that teens also reported on the same survey, parents were the number one deterrent for substance abuse. She said it's a good idea for parents to be aware of what's out there.

"Marketing matters, so whenever teens see these things that look like candy and look like things they typically enjoy, you know, of course, they're going to gravitate towards something like that," she said. "That's really why we hit home with parents, you know, be aware of what's out there."

Smith said parents should talk to their children early and often about substances, and to focus on providing students with other ways to de-stress.