Children are a Gift: Siblings Have Desperate Need

There is a desperate need to find a foster home for Cruz. He and his little sister are separated right now and CPS says sending him to a shelter would be a step in the wrong direction. A decision has to be made by May 31, 2017! 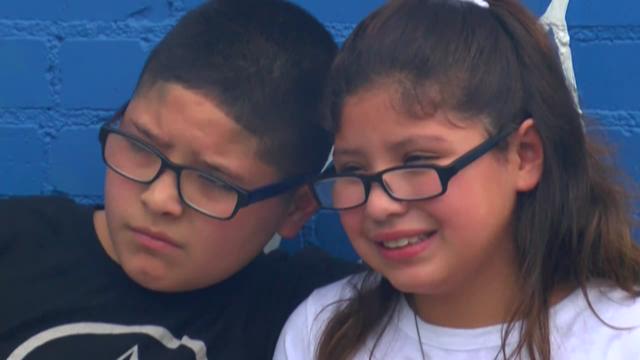 We featured this brother and sister in August, 2016 in our Children are a Gift report. Unfortunately, their wait for a forever family to share together continues and is now reaching a critical stage.

The irony of this update is Cruz's behavior has improved so much he is about to be moved to a different placement by May 31, which is just 3 weeks away. The problem is the only placement available is a shelter as opposed to a foster home, which Child Protective Services caseworkers and his Court Appointed Special Advocate say would be detrimental to his progress and the hope of being reunited with his sister.

We are sharing their story again in a desperate plea the right family will hear their story this time and come forward to help.

Cruz and Mikaela, or Mickey as he calls her, look forward to their monthly visits. While apart in separate foster homes, they keep pictures of each other close.

"Every time I look at it I cry cause I miss him and it's been a while since I've seen him," said Mikaela.

Cruz quickly noted, "I would let nothing hurt Mickey."

"When I was little and being picked on and bullied he would always stick up for me. That's why I love him," added Mikaela.

"I've been an A/B honor roll student for as long as I can remember," he said proudly.

"Cruz is intelligent. He's perceptive. He's inquisitive. He speaks far beyond his years many times. Many say he's 13 going on 30," remarked Rhonda Sabri, his caseworker with Child Protective Services.

"I like to take apart some technology and put it back together because I like to see how things work."

"I have a collection of keys. I love keys and I want to be a lock smith," he said excitedly.

Mikaela also has a collection. It involves stuffed animals.

"I have a bunch! I have a big giant pig and a small pig. I love giraffes. One of the things that I like about them is they have really strong tongues," explained Mikaela with a giggle.

She needs guidance with schoolwork and her brother helps when he can.

"Sometimes when we are together we will read. He'll help me read because I don't know how to read."

This 10-year-old enjoys swimming, country music and gets along well with others. Her foster dad, Jay Rohus, says she's a joy to have around.

"She's a sweet little girl. She has a great personality. She loves her brother dearly and he loves her dearly."

Cruz and Mikaela have been in foster care almost three years.

"Foster care has been great. I've been treated great not like how they treated me at my house," Cruz announced.

Both are in counseling to deal with their past and making great progress. However, there is nothing more important to this brother and sister than to share their lives together.

"Cause every day Mickey motivates my life. I feel like she's what kept me going. To see her again it means everything to me," declared Cruz, as he looked his sister.

"No matter what happens, he will always be there for me and he loves me for who I am," replied Mikaela.

And hopefully a forever family will soon love them both for who they are and encourage them for what they will become.

Again, there is a desperate need to find Cruz a foster home by May 31, 2017. Of course the ultimate goal is to find him a forever family together with Mikaela. They say that would be a dream come true!