A local non-profit, founded by wounded veterans was honored by Gov. Abbott for changing the lives of veterans with PTSD through hunting and fishing trips. 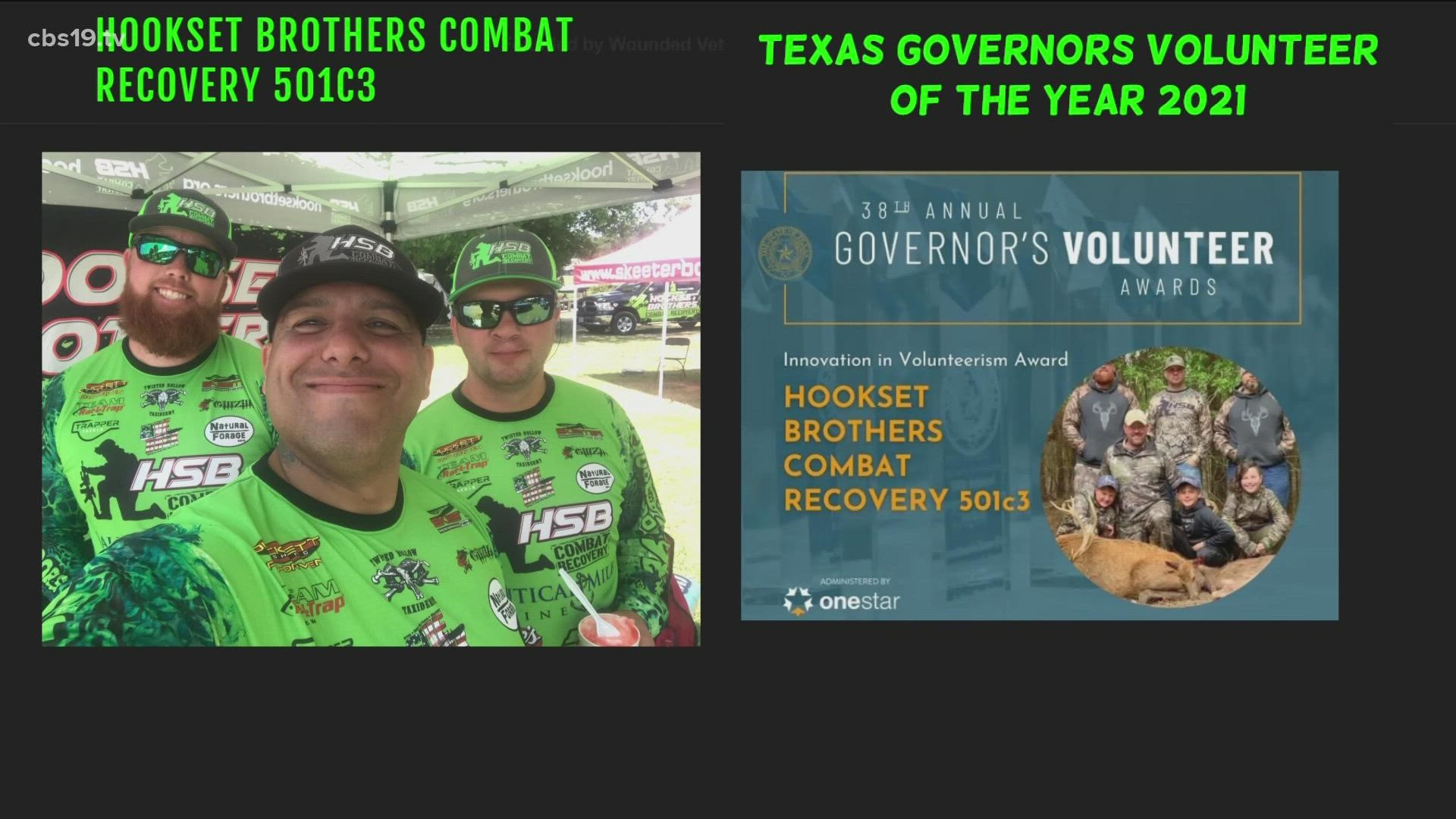 BULLARD, Texas — A local nonprofit, founded by wounded veterans is being recognized by Gov. Greg Abbott for changing the lives of their fellow men and women who once served in the military.

Hookset Brothers Combat Recovery, out of Bullard, was given the Innovation in Volunteerism Award.

Coming home after serving their country in the armed forces often isn't an easy transition.

Adam Troy and Martin Montoya know that because they lived it, along with their fellow founding brother, Kody Corrin.

Troy suffered serious injuries while serving as an Army Staff Sergeant in Iraq.

"I came home and got skin grafts from third degree burns and I met Martin at our battalion, actually, after I recovered from the hospital. We just started fishing kind of on our lunchtime, and then Martin deployed, and then he was injured in Afghanistan, third degree burns," Troy explained.

After both medically retired from the army, fishing became an important part of their recovery. They became a popular fishing team in East Texas raising awareness about how the outdoors changed their lives.

It was actually an encounter with another veteran that gave Hookset Brothers its beginnings to empower veterans through combat recovery.

"We took a veteran out fishing, and realized that it saved his life. He called and said, 'Hey, sorry, I just wanted to let you know that, you know, I was ready to take my life and I saw that I had a trip with you guys and I knew that I didn't want to disappoint you and miss that trip. So I said, I will do it when I get back.' Well, that soldier took that trip. And it changed his life," Montoya explained.

Since then, the Hookset Brothers, which is 100% volunteer run, added once in a lifetime hunting excursions to their recovery trips.

"It's so great, because you can just kind of tell a story and without going into the deep details and they just understand you," explained Lara Harris, Ret. United States Air Force.

Lara Harris recently returned from one of those life-changing hunts. She served almost 12 years in the Air Force as EOD. That's explosive ordinance disposal, or bomb squad to us.

"So a lot of people, you know, I think they understand PTSD as like the veterans that have like panic attacks when they hear fireworks or car backfiring, things like that. But the really hard part of it is, you just lose interest in everything. You know, like, I hadn't left the house for a month, like I haven't dated in years, like you just everything you used to love just kind of becomes really numb," said Harris.

But something about being on that hunt... on the most beautiful ranch Lara had ever seen... with the Hookset Brothers and the generous ranch owners was healing.

"I don't even have words for how I felt throughout the whole weekend. I think at one point like, in the middle of a hunt, I just started crying because I realized what was going on and how honored I was to be you know living that experience," said Harris.

It's why the Hookset Brothers work tirelessly raising money and getting hunts donated so more veterans return home with a will to live and we stop losing them to suicide at such an alarming rate.

"I want them to know and realize that there's guys like me, who still care and want to help them. I'm not a counselor. We're not doctors. None of us are PhD professionals, but we've been there and we will listen. But if I can play a small part with my brothers, and the community coming together to help at least one soldier, I'm all in 100%," said Montoya.

But they've actually supported more than a hundred heroes and their families each of the last 3 years.

They're hoping the governor's recognition brings even more awareness to their mission.

"And we're going to do this until hopefully there's no longer need," said Troy.

The Hookset Brothers have also raised funds for funerals of fallen servicemen and women and hosted holiday celebrations for military families.